The Summer of Agatha Christie: Part I

There are few things more pleasurable in the summer than a good Agatha Christie mystery. Bookclub Girl likely knew this when she decided to throw together an impromptu Agatha Christie Readalong for the summer, beginning with Christie's immortal, classic mystery AND THEN THERE WERE NONE. 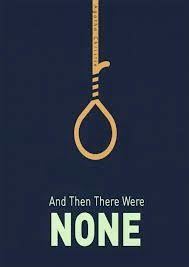 Unlike her famous mystery series featuring her famous detectives Miss Marple and Hercules Poirot, And Then There Were None (1939) is a standalone novel with no featured protagonist. Yes, you read that correctly: this novel has no protagonist. Instead we have ten strangers who find themselves invited to the mysterious and secretive Soldier Island, a privately owned isle tucked off the coast of England. Each of them eagerly arrive, believing the false pretenses that led them them there, only to find that the only thing they have in common with one another is a dark deed in their past....and the day for accountability is finally at hand. One at a time, the guests at Soldier Island die for their past misdeeds. But who is killing them on this completely deserted island?

For Christie, And Then There Were None was one of her most challenging novels: ten people lured to a deserted island on false pretenses. One by one, they die. She later reflected, "I had written this book because it was so difficult to do that the idea fascinated me. Ten people had to die without it becoming ridiculous or the murderer being obvious." She succeeded only too well. In her determination to keep the murderer's identity a secret, it was necessary for Christie to write an epilogue explaining whodunit because no reader would ever be able to guess.

But aside from the impossibility of guessing whodunit (go ahead, try it...I dare you), Christie infused her novel with dark themes of innocence, guilt, and accountability. Each one of the ten characters she traps on Soldier Island has committed a crime for which they cannot be legally convicted. Yet law or no law they are still guilty. Someone has decided to impose justice. Christie develops a psychological drama that would give any modern thriller a run for it's money as each character grapples with their past crimes and imminent death.

Further heightening the psychological frenzy is the 1869 Frank J. Green poem found framed in each guest's room entitled "Ten Little Soldier Boys."* One by one each guest dies as foretold in the poem....talk about tension. 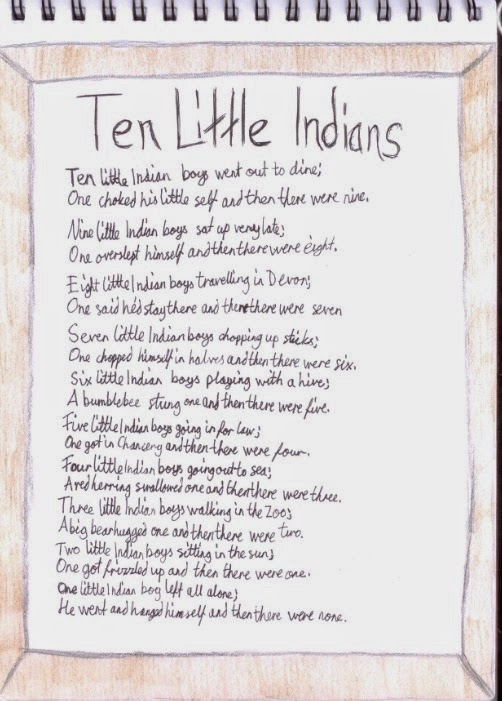 All things considered, this really is one of Christie's best novels, widely considered her masterpiece. Even for those readers who don't normally venture into the mystery genre, And Then There Were None should be required reading. If you're unfamiliar with the mystery canon, it's helpful to know that Christie broke a major rule of the genre by making it impossible for the reader to solve mystery before the end of the book. Those well-versed in the genre have definite opinions on this breach of accepted etiquette. For those who don't read a lot of mystery novels, this is something to keep in mind as you read the novel so you can form your own opinion on the matter. Personally, I loved not knowing, but others feel quite different.

Just put the book on your pile and read it this year. Then come back and talk to me --- because you will want to talk about it!


*Foot note of interest: Frank J. Green's poem was originally titled "Ten Little Nigger Boys." (This was the original title of And Then There Were None.) This was - for obvious reasons - later changed to "Ten Little Indian Boys" for UK editions while US editions were titled And Then There Were None. By 2007, the poem had again - for the purposes of Christie's novel - been changed to "Ten Little Soldier Boys" and some of the original lines modified to meet the types of murders committed within the novel.
Posted by Unknown at Tuesday, July 01, 2014

Labels: #monogrammurders, Agatha Christie, And Then There Were None, Readalong