The Sea and the Silence 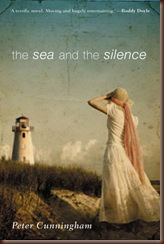 Every once in a while, a novel comes along to remind us readers that writing is far more than putting words down on paper….it is a craft.  Peter Cunningham’s historical novel, The Sea and the Silence, is one of those books.

Set amid the political upheaval that followed the Irish War of Independence in the early half of the 20th century, Cunningham takes the delicate threads of one woman’s life and weaves them into a delicate yet masterful tapestry that reveals not only the historical time period, but how it impacted those who lived through it.

The story is broken into two parts:  the first gives us Iz, a local landowning patrician’s daughter who finds herself in a somewhat loveless marriage to a cheating, careless husband.

The fragile strands of her marriage are softly exposed.  So slowly and sedately is the story set up that the reader is quite unaware of the roller coaster ride they are about to embark on in the second part of the story.  And it is this second portion of the novel that reveals Cunningham to be a master of his craft as he returns in time to Iz’s life before her marriage and how she arrived there, through the chaos of the Irish fight for autonomy and independence.

Cunningham’s format echoes the sedateness of the first half of the novel:  quotation marks around dialog are done away with altogether, replaced with dashes.  Rather than serving as a distraction, this technique merely enhances the story.

And what a story it is….tragedy, great love, political upheaval…all wound up in one short novel.

If Irish social history interests you at all, we highly recommend you give this novel a shot….you won’t be disappointed.