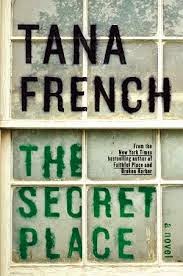 For readers who have discovered the dark and twisted delight of Tana French's critically acclaimed Dublin Murder Squad series, the upcoming release of The Secret Place - the fifth book - is one of the most anticipated releases of the year. French has already secured her place as the queen of psychological crime novels; the Washington Post recently named her "one of the most talented crime writers alive." With a bar set so high, there is always that short moment of fear when you open each new novel:  the fear that this time the magic French seems to imbue in each book won't be there.

One of French's endearing traditions: every novel's protagonist is plucked from a previous novel where they made an appearance as a secondary character. The Secret Place has harvested Stephen Moran, who fans will remember from the 2010 novel Faithful Place where the eager young detective assisted one of French's most memorable characters, murder squad Detective Frank Mackey, solve a rather gruesome crime. But that was years ago and Detective Moran's career didn't accelerate the way he hoped. Languishing in the Cold Case Department, he's both surprised and oddly excited the day Holly Mackey - Detective Frank Mackey's teenage daughter - walks into his office with fresh evidence in a cold case murder of a sixteen year old boy that occurred on the grounds of St. Kilda's, Holly Mackey's exclusive Dublin boarding school.

Assigned to team up with Antionette Conway, the one murder squad detective all the lads hate for not being a lad, Detective Moran at last has a chance to prove himself worthy of the big time: the murder squad. And thus Moran and Conway enter the byzantine halls of St. Kilda's where they find that the apparatus of the teenage mind can be far, far darker and more twisted than the most deviant sociopaths stalking the streets of Dublin.

French brilliantly pulls off a dual timeline throughout the novel: Moran and Conway's detecting efforts take place throughout the course of one single day as they interview students at St. Kilda's, while the alternative timeline follows the students in the months leading up to the murder. It's a crafty technique and her success in pulling it off so seamlessly proves that French is at the top of her game in the crime writing scene.

"Late in January, half past ten at night. Fifteen minutes till lights-out, for third-years and fourth-years at Kilda's and at Colm's. Chris Harper - brushing his teeth, half thinking about the cold soaking into his feet from the tiled floor of the bathroom, half listening to a couple of guys giving a first-year hassle in a toilet cubicle and wondering whether he can be arsed stopping them - has just under four months to live."

Moran and Conway are one of French's better detective teams. Although this case could potentially boost their professional reputations, failure to find answers at St. Kilda's in this one single day might very well do significant damage to their respective career paths. It's a refreshing, if somehow ironic, change to see law enforcement characters dump the Protect and Serve motivation that most often pepper crime novels. A distrust that slowly evolves into grudging mutual respect adds to the acerbic banter between the two detectives, a relationship that doesn't reach it's full potential until the very end of the novel making it somewhat sad, knowing we won't be seeing them again, as protagonists anyway, in future books.

As for our suspects --- oh, our suspects. A girl's boarding school makes for a virtual viper's nest of suspects. These are, after all, sixteen year old girls. But French goes much deeper than that. She understands the vitality that pulsates just underneath the surface there and the myriad of ways that can be expressed - good and evil. Perhaps most disconcerting is the acknowledgment that teenage girls do indeed have to deal with the themes such as slut-shaming and women viciously cutting down other women at so young an age. Disturbing? Yes. Fascinating? Yes.

All of this isn't to say the novel isn't without a glaring problem. For reasons unexplained, French introduced an element of magic (as in witchcraft magic) to the story. While the idea of boarding school girls playing with magic might have played well, actual magic - however small - added nothing of value to the plot and only served to detract from the seriousness of her writing.

Aside from that misstep, The Secret Place is an excellent addition to an otherwise notable series. French's uncanny ability to capture the psychological nuances flowing between her characters - both adult and teen alike - keeps everything nicely taut from the very first chapter. Longtime fans will of course be watching the secondary characters -- who will star in the next Dublin Murder Squad novel?

Highly recommended for fans. First time readers are encouraged to begin with In the Woods, the first book in the Dublin Murder Squad series, although that isn't strictly necessary to enjoy this novel.