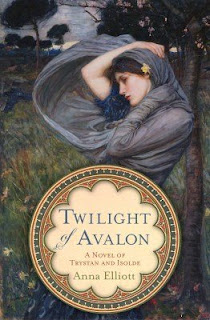 Twilight of Avalon: A Novel of Trystan & Isolde, by Anna Elliot

For centuries past the Arthurian legend has been passed down from generation to generation. Thankfully, the myriad of variations of the tale have been keeping modern day authors as busy in the retelling as the ancients bards were.

The latest version to hit bookstores is Anna Elliott's Twilight of Avalon, the first of what will eventually be a full trilogy recounting one of the earliest known versions of Arthurian legend, that of Trystan and Isolde.

For those aficionados of the genre, it seems only fair that we give you a brief sketch of Elliott's take on the Arthurian soap opera:

King Arthur is not the chivalrous ideal of courtly love here. In a fit of passion, he allegedly rapes his sister Morgan, a woman steeped in the old religion in a time when the encroaching Christian priests are quick to brand any non-converting woman a witch. The accusation usually sticks. Morgan gives birth to Arthur's son, Mordred who later, as heir to Arthur's throne, betrays his father, steals Arthur's wife Gwynefar and begets a girl-child with his step-mother. The child is named Isolde. Arthur and Mordred meet in one last epic battle for the High Kingship of Britain and end up killing each other off, leaving Britain in chaos and ripe pickings for the encroaching Saxons, while Isolde is married off to the next High King of Britain, Constantine.

And this is where Elliott's story begins. King Constantine is betrayed and murdered, leaving Isolde alone to battle charges of witchcraft, political intrigue, and a mythical past. To do so and save Britain from destruction from within, Isolde turns to a former Saxon slave, Trystan. The unlikely pair develop a tenuous friendship in a time when trust and loyalty are rare commodities in the world.

And A Reader's Respite loved every single word.

Isolde is one of the most real and heroic characters we've encountered in a long time, a woman fighting for what she believes in within the confines of her gender and time. This is not, we repeat, NOT a love story. At this point in time, there is no room for romance or love in Trystan and Isolde's world. This is a world overflowing in violence, plague and survival. Trystan and Isolde's bond is, at this point in the story, a thread of friendship and mutual respect.

And yet this is not a story of despair, it is a story of hope. A rich cast of supporting characters is the icing on the cake here, providing touches of humor just when you least expect it and sharp insights into the psyche of the time period.

"Yes, the plague year. The sign of God's wrath at the great traitor-king." Grim amusement flickered briefly about the corners of Coel's eyes. "Though I confess I've my doubts when anyone - priest or commoner - starts putting words in the Almighty's mouth. I don't know whether God made man in His image, but it's certain man has returned the favor."
Twilight of Avalon, by Anne Elliott

Whether you are a fan of the Arthurian lit or looking for a good introduction to the genre, A Reader's Respite wholeheartedly recommends Twilight of Avalon!

Now A Reader's Respite knows there must be someone out there dying to get their grubby little hands on this book. If you're interested, you know the drill: leave me a comment saying so and we'll draw a random winner to be announced next Thursday, May 28th. International peeps welcome!

Devourer of Books
All Booked Up

Historical Tapestry has a great interview with author Anna Elliott
All
Posted by Michele at Tuesday, May 19, 2009