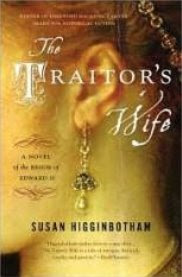 The Traitor's Wife, by Susan Higginbotham

Those of you who hang out around here know picky A Reader's Respite is about historical fiction.

If you don't regularly read our ranting and ravings, we'll get you caught up:

A Reader's Respite is very picky about historical fiction.

We like our historical fiction very, very well-researched. Don't mess with known history or rearrange timelines just to fit a plot. Don't over-modernize the dialogue. And above all, do NOT dumb it down just to appeal to vapid larger audience.

Well we are here to shout it from the rooftops that author Susan Higginbotham does none of the above. And she does is very, very well.

The Traitor's Wife recounts the reign of England's King Edward II, as seen through the eyes of Eleanor de Clare, the King's favorite niece and wife of Hugh le Despenser. Hugh, for those not entirely familiar with this fascinating period of England's history, was the notorious chief adviser and lover of Edward II. 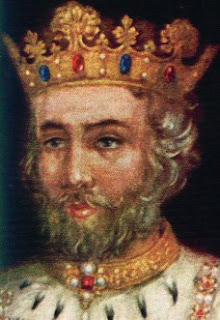 Edward II
Now this is where it gets interesting. Hugh le Despenser is arguably one of the most hated figures in British history. The BBC History Poll of historians in 2006 ranked him as the Worst Briton that lived in the 14th century. (For comparison, Jack the Ripper was voted the worst Briton of the 19th century.) And yet Higginbotham has mangaged to make him, more or less, the hero of this novel.

How? Higginbotham doesn't ignore Despenser's flaws (although one alleged incident of the physical torture of a woman is noticably absent), but instead views him through his adoring wife's eyes, who sees his tempered flaws but also his kinder, gentler side.

But few, if any, characters in The Traitor's Wife are painted as strictly saints or sinners. Higginbotham is far too talented an author to fall for the ol' good-guy versus bad-guy thing. Each meticulously researched character is presented with all of their human flaws and the reader can draw their own conclusions.

The story follows the soap opera-esque British history that occurs in Eleanor's lifetime, including the deposition and alleged murder of Edward II by his erstwhile Queen, Isabella and her lover Roger Mortimer, the execution of Hugh le Despenser, as well as Eleanor's own imprisonment in the Tower.

For those interested in 14th century British and Scottish history, there is a rich cast of characters guaranteed to satisfy the most discerning amatuer historian amongst us (William Wallace of Braveheart fame even merits a mention).

If you enjoy thorough, yet highly entertaining historical fiction, get ye this book. You'll be sucked into the story by page 2 and it will rivet your attention to the very last page.

Carla Nayland's Blog
Passages to the Past (plus an interview!)
Cheryl's Booknook
Lynne's Litle Corner of the World
Historical Boys (interview with Susan)